On 8 October 2014 during the inauguration of 96th academic year of Poznań University of Technology the new Teaching Centre of Chemical Technology Faculty of PUT was officially opened.

During the inauguration the Rector, prof. Tomasz Łodygowski, informed the community that this year there were six candidates for every place at our university, and in all there were 23,000 candidates who wanted to join our community. The most popular majors, which had more than 12 candidates per place, were logistics and biomedical engineering. The Rector stressed that PUT seeks forms of the so-called practical education where business partners understand their role in the education process. What I mean here are the practical courses offered by the university and conducted in cooperation with companies such as Volkswagen Poznań, Phoenix Contact, Solaris and Stern – prof. Łodygowski said.

As an example of the university’s cooperation with other institutes, prof. Łodygowski named the foundation of shared labs by PUT and Leibniz Institute from Frankfurt (Oder). The labs study semiconductors and their physical properties. The effects of work of the researchers will be put into practice in electronics, medicine and photonics.

The new four-storey building of the Chemical Technology Faculty’s Teaching Centre has three large lecture rooms that can seat 270 people, and 54 specialist laboratories with the so-called process room. The new building was erected on the bank of the Warta and it forms a part of PUT campus. 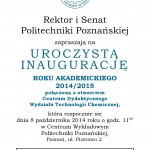