On Tuesday, 2 June, at 6 p.m. the Lecture Hall of Poznań University of Technology (ul. Piotrowo 2) will hold a vernissage of photo exhibition entitled Odkrywanie tajemnic Majów (Discovering the Secrets of the Maya Peoples). The event will be attended by Carlos Humberto Jumenez Licona, Ambassador of the Republic of Guatemala in Germany.

The exhibition is the beginning of cooperation between Poznań University of Technology and the Honorary Consulate of the Republic of Guatemala that opened in February 2013 in Poznań. The closest embassy of Guatemala is situated in Berlin. The aim of the consulate is to assist Gautemalan citizens residing in Poland, promote the culture of the Maya people and tourism.

Odkrywanie tajemnic Majów exhibition comprises around 200 photographs by Robert Słaboński and presents the results of work of Polish archaeologists from Jagiellonian University, dr Jarosław Źrałka and mgr Wiesław Koszkula. They have been studying the ancient Maya city of Nakum, situated in the north-east of Guatemala, since 2006. The principal aim is to trace as many as possible signs of civilisation which dates back to the earliest stage of Maya history, i.e. the so-called pre-Mamom period around 1000-700/600 BC. The archaeologists found e.g. royal tomb with utensils, remains of skeleton and hundreds of jadeite accessories. One of the most valuable discoveries is a pectoral cross found on the chest of the deceased.

The American Time included the Nakum project on the list of 100 New Scientific Discoveries. Before that, the results of work of Cracow-based archaeologists were recognised by Archeology magazine that listed the project as one of 100 Most Important Discoveries of 2011. 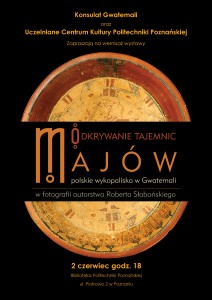